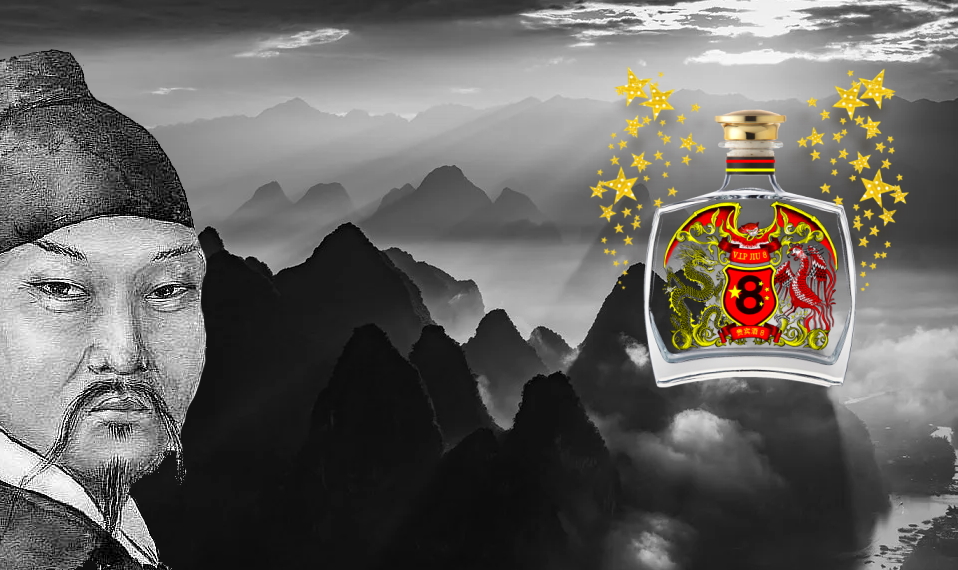 ‘What is that pretty bottle?’ asked my daughters friend, one evening last winter, whilst we were all sitting around the log fire. My daughter and her friend were enjoying a glass of shandy, lounging on the sofa, my wife was sitting opposite me in the easy chair, sipping a vodka and coke, whilst I had a dram of my favourite tipple. It was all warm and cosy there in the living room, but outside, the snow was falling fast and thick, driven by a ice cold wind that was whistling a mournful dirge.

Turning, I looked to where my daughters friend was pointing. ‘That my dear is a bottle of V.I.P Jiu 8.’

‘Why do you drink the stuff.’ she asked with a grimace on her face. ‘This is about a strong as it gets for me.’ she said holding up her shandy glass.

Smiling I replied ‘There are many reasons, but one of them is, I like it.’

‘I like the pictures.’ she replied, then added ‘What do they mean.’

‘Well now then,’ said I, pondering for a moment to gather my thoughts. ‘Although this particular bottle was inspired by the great Chinese emperor Kangxi who lived over three hundred years ago. To fully understand its symbolism; we must travel further back in time, to a time when man and gods and magical beasts wandered across the earth, to a time when harmony and discord ruled the heavens. Back to the time of the star gods, the jade emperor and the poet Li Bai, back to a time of magic and heroes.’

‘Li Bai! That’s a funny name.’ giggled my daughter and her friend together.

Ignoring their interruption I carried on. ‘ Li Bai was no ordinary poet. There is a story that his mother had a dream of a falling white star and after dreaming this, she became pregnant with him. Which gave rise to the myth that he was an immortal who had come to earth. Myth or not, he certainly had many an adventure along with his magic bottle,’

‘Magic bottle,’ exclaimed Betty for that was my daughters friends name. ‘Do tell us the story.’

‘Alright.’ I answered as I rose from my seat and walked over to where the bottle of V.I.P Jiu 8 was resting, picking up the bottle I said. ‘Before I tell you about some of his adventures, let me explain about the original magic bottle. Well as I said earlier Li Bai was a poet, but his best poetry was always written when he had a few tots under his belt. One evening as he was wandering through the blue river valley, he wrote a poem. Which he gave the title “Ancient Air” and as he read it aloud to the night sky, the three-star gods over heard and were impressed and so they gave Li Bai a magic bottle that never emptied, that was so Li Bai would always have inspiration, but Fuxing the god of happiness, Luxing the god of prosperity and Shouxing the god of longevity realised that by giving Li Bai a never emptying bottle of liquor, it could lead to some tricky situations.

They pondered over this dilemma until they came up with the idea of placing the dragon, the bat and the Fenghuang there within the bottle to protect him.’ I then pointed out the dragon the bat and the Fenghuang. ‘The dragon.’ I said ‘has control over water, rainfall and floods, it is also the symbol of power and strength and is a benevolent creature to those who deserve it. The yellow dragon can also control time and seasons. The bat represents happiness and longevity and is often depicted in a bright red colour, which is the colour of joy. The Fenghuang represents balance and harmony, for its head is the sky, its eyes are the sun, its back is the moon, its wings are the wind, its feet is the earth and its tail is all of the planets.

‘What about the number eight?’ asked my daughter, Celestine, who by now was immersed in the storytelling.

‘And the five stars.’ Chirped in Betty.

‘Well then,’ I said rather loudly, for I was getting carried away with the tale. ‘The queen mother of the west, who has many names, one of which is Xiwangmu and who resides on mount Kunlun, in the blue gem palace, which is believed to be paradise and used as a meeting place for gods and also a cosmic pillar, where mortals and gods could communicate, and there within the palace is the orchard, where the peaches of life grow. Which they say, only ripen once in every three thousand years, but that is a different story. Anyway, Xiwangmu was also alert to what the three gods and the jade emperor were doing . So she bestowed on the bottle the five stars, to symbolise the five elements. Which are, metal, wood, water, fire, and earth. They also symbolise free movement. Which is what gave Li Bai his wanderlust. Lai Bai was very pleased with his gift, so he named the bottle V.I.P Jiu 8. Now settle down, and I will tell you about the beginning of the pointless journey.