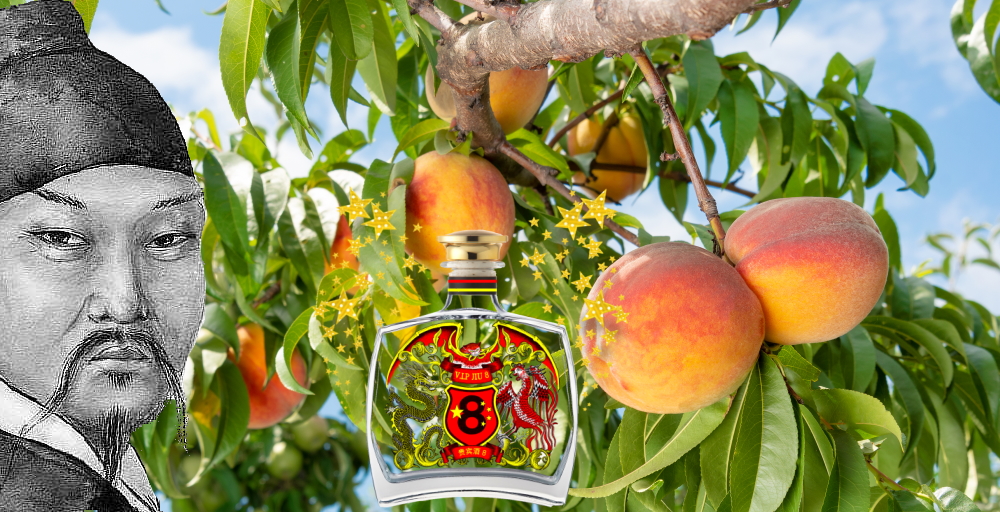 Li Bai finally reached the town that he had seen ten days earlier, from across the gorge. In that ten days he had not seen anyone and was looking forward to any hospitality the town had to offer.

Upon entering the town, he sought out a bath house and spent a leisurely two hours bathing, having his nails clipped and getting a neck massage. Fully relaxed, he then made his way to the nearest tavern, finding a place to sit, he put down his backpack, bamboo box and staff. Making himself comfortable he ordered a meal of vegetable hot pot. He was just finishing this, when a youth rushes into the tavern and tripped over his bamboo box.

Getting up the youth apologises for his clumsiness, then hurried up to the tavern keeper and blurted out ‘Your granddaughter’s hair has been cut off by a very beautiful young woman, who when confronted turned into an old hag and the pole she was carrying turned into a spear. A black fox she was with grew to the size of a horse, which she mounted and rode away. Taking with her one of your granddaughters braids.’

Li Bai could not help but overhear. Unwittingly shouted ‘Leng Mo, she is a witch who is a soul snatcher.’

The tavern keeper turned to Li Bai and asked ‘are you a wizard.’

‘No, answered Li Bai ‘I am not, but I do know a little about such matters. The soul has two parts, one the cloud soul, this is higher consciousness, which can leave the body. The other is the white soul, which is tied to the body. For a person to stay healthy, these two should be balanced. It is the cloud soul that the witch has stolen and if not recovered your granddaughter will grow ill and eventually die. The witch will chant spells over the hair that she has stolen and the cloud soul will fall under her power and can be used for all kinds of devilry. For it can give life to paper images of either man or beast, which the witch controls to do her bidding and these supernatural beings have great powers. They can fly or travel to the afterlife. It is important that you recover the braid before the witch can cast her spells. You have twenty-four hours before she can start her evil work.’

‘Can you help us, my granddaughter is only nine, and we are simple folk with no knowledge in these affairs.’ beseeched the tavern keeper.

Although not wanting to get involved, there was something deep within his subconscious that made him feel uneasy by saying no. ‘Keep the child in the house until I return.’ he said. Picking up his belongings, he turned to the youth ‘take me to where the witch was last seen.’

The youth led him to a dirt track and pointing, he said ‘She rode that way towards the forest.’

Thanking him Li Bai then asked if he knew where there was a peach tree. ‘For I need to fashion a sword out of its wood.’

The youth looked astonished. ‘A wooden sword, a child’s toy, against a powerful witch.’ he said in wonderment.

‘Yes.’ said Li Bai smiling ‘Just the touch of a peach wood sword will turn her to dust.’

‘There is a peach tree around the back of that house.’ said the young boy, pointing

Li Bai walked around to the back of the house, where there was an old man mixing different powders together. ‘Hello.’ said Li Bai ‘is it alright if I take a branch from your peach tree.’ and he explained why.

While he was fashioning the sword, just to be polite, he turned to the old man and said ‘What are was doing?.’

‘It will be the New Year soon, I am making huo yao.’ said the old man proudly.

‘huo yao, flaming medicine. I wonder!,’ muttered Li Bai. ‘May I have some. I will pay you.’

‘Take what you want.’ offered the old man.

Li Bai filled a stoneware pot and sealed it. Having made the peach wood sword, he took out his magic bottle and took a drink, and offered it to the old man, who thanked him and took a deep swallow, then gave the bottle back. Li Bai gave the old man some coins and then called forth the dragon, which promptly appeared along with the bat and fenghuang. ‘Take me to the forest, the witch has not got to much of a head start, we may catch up to her.’ So climbing on to the dragon, they took to the sky and headed for the forest.

Upon reaching their destination, they found the forest to be enchanted. It was dense with undergrowth and quite impenetrable, for the growth of silver thorn blocked entry.

‘What now?’ pondered Li Bai ‘The witch will hear me, long before I find her.’

‘I will locate her’ said the bat, and flew silently through the trees. Soon the bat was back.

‘The witch is in a cabin, towards the centre of the forest. The fox sits outside on guard. The braid of hair hangs on a hook in the rafters.’

‘How will I be able to get near to the cabin.’ mused Li Bai

‘I will fly you over the treetops and let you off at a tree nearest the cabin. Where you can climb down. I would come with you, but my size makes stealth imposable.’ said the dragon.’

‘I will sing to put the fox in a trance, I will sing in such a pitch only foxes will hear, and I will stay by the side of the dragon.’ said the fenghuang.

So putting this plan into action Li Bai climbed down to the ground and peeping around the tree he noticed the fox was fast asleep by the door of the cabin. The bat had followed and hovered over Li Bai’s shoulder. Stopping to think for a moment, he noticed a wisp of smoke coming out of the chimney. So turning to the bat he said ‘Here take this and drop in down the chimney,. Then return here. The fire will ignite it and when that happens it will cause smoke and soot to fill the cabin. This will confuse the witch. We will rush in, you go for the braid of hair and fly back to the dragon. I will confront the witch.’ He then handed the bat the stoneware pot.

‘How will we know when it is time to move in on her?’ asked the bat.

‘We will hear a loud “pop” smoke and soot will billow out of the chimney, then we move.’ answered Li Bai

No sooner had the bat returned to Li Bai’s side, when a mighty explosion rent the air, deafening the ears and benumbing the mind. The roof of the cabin landed five Bu away, up a tree. The walls of the cabin had been flattened and there were small fires burning. With smoke and debris still floating in the air. The witch had been blown off her feet and was struggling to stand up. Her clothing was all tattered and torn, soot streaks marred her beauty and her hair was a singed, tangled mess. The fox had awoken with the explosion, turned grey and fled into the forest. If Li Bai and the bat had not been behind the tree. They also would have suffered the same.

Quickly Li Bai recovered from the shock, seized the opportunity and threw the peach wood sword at the witch. She just had time to look up, when it struck her between the eyes. Immediately she turned to dust and all her magic spells were broken.

The dragon poked its head down between the trees and exclaimed ‘In the name of heavenly lights, what is going on.’

‘I think I used too much huo yao.’ replied Li Bai

The dragon looked at the mayhem and said ‘An understatement to say the least.’

The bat located the braid of hair dangling from a branch high up in a tree. ‘Here we are.’ and gave the braid to Li Bai, who walked over and picked up the peach wood sword. Then kicking the witches rags, he said ‘Let us now go back to town and tell them the good news.

‘And that.’ Said Li Bai is how it all happened, and he handed the braid of hair to the tavern keeper, The tavern keeper burst out laughing. Then he quickly became serious and handed Li Bai a present saying ‘A small gift to thank you for all that you have done, a bronze magic mirror. When light is shone on it, it reflects the swords of Gan Jaiang and Mo Ye.’

Li Bai said ‘Don’t thank me, thank the old man who was making huo yao and his peach tree.’

But the tavern keeper insisted, saying. ‘But without you, the outcome would have been much different.’

So Li Bai accepted the gift with both hands saying ‘thank you.’

Putting the gift in his backpack he turned to the tavern keeper and said. ‘Here is the peach wood sword, hang it over your door, and you will never again be troubled by evil magic,’

With that he left the town and went on his way. After a while he sat by the roadside. Taking out his magic bottle of V.I.P Jiu 8 he took a drink. ‘What have I learned today? “Three kinds of fate that control our lives. Heaven’s fate, which we have no control over. Earth’s fate, which we can change a little and human fate, which is entirely upon ourselves.” So taking out pen and paper he wrote.

There are steps that must be trod

Whether we choose or not

For to balance up certain deeds

It’s the only choice we’ve got