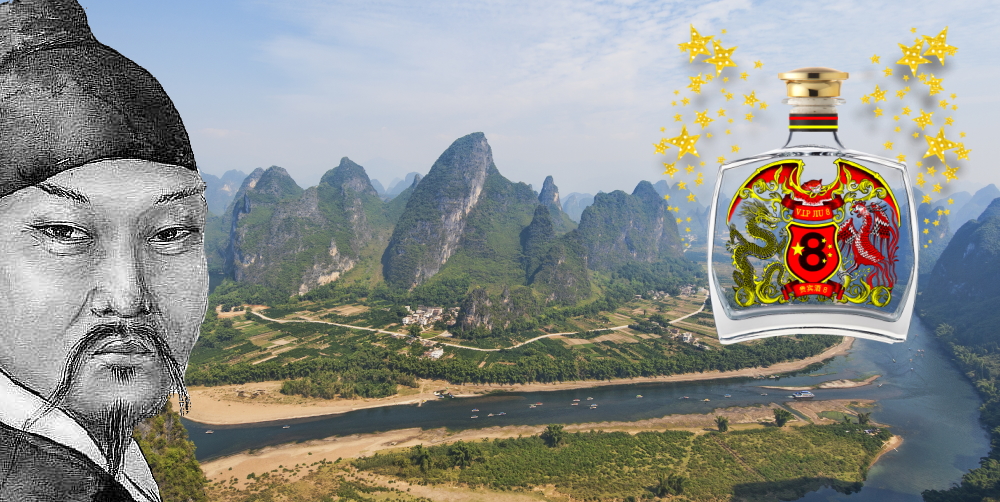 Li Bai meandered with the river, sauntering slowly along, thinking of how much of a beautiful day it was, with the birds singing and grasshoppers chirping. Stopping to look around, he could see a complex system of lakes, marshes and multiple river systems laid out before him. When from out of nowhere emerged a hairy rhinoceros with two horns, which was walking towards him.

Li Bai was startled, but the rhinoceros said ‘Do not be afraid, I have not come to harm you, I only want to talk with the yellow dragon.’

Li Bai, was not perturbed by a talking rhino, for after the magic bottle nothing fazed him. Instead, all he said was. ‘Hmm! How are you going to find this creature.’

‘He is somewhere very near, but invisible, for I can feel his presence.’ uttered the rhinoceros.

‘Well then, in that case I suppose if the yellow dragon wants to talk to you, it will manifest its self. Do you not think.?’ replied Li Bai.

No sooner were the words out of his mouth, when the yellow dragon appeared amongst them.

‘What do you want with me.’ It enquired of the rhinoceros.

‘I would like you to take me forwards in time.’ said a very serious rhino.

‘Why do you want to travel forwards in time?’ Asked the dragon.

‘My species will become extinct, if I do not talk with a certain hunter in the future. If he does not listen then I must kill him.’

‘How far into the future do you want to go, and where?.’ The dragon wanted to know.

‘To the year sixteen ninety-nine, in this spot.’ replied the rhinoceros

‘That is over nine hundred years from now.’ said the dragon after doing a quick calculation in his head. ‘How do you know what the future holds?’ queried the dragon.

‘I was warned by the yellow emperor, and he told me to see you. He said wait here and eventually the yellow dragon will come to you. Tell him I sent you.’

The yellow dragon thought upon this. ‘Had not my own father given the yellow emperor a magic book with knowledge of astrology, geology, medicine and divination and when the yellow emperor grew old, did not my father fly him to mount Kunlun to become a god. How can I refuse?’ So he said to the rhinoceros. ‘Only if Li Bai is willing to travel with us can I take you, for I have been charged with looking after his well-being.’

Li Bai thought that this was a splendid idea, a sojourn into the future, so he said ‘I would love to help the rhinoceros solve his problem.’

The yellow dragon then explained. ‘When we leave the present, we will arrive in the future at dawn, and we must leave at sunset, so that gives us twelve hours in the future, but when we return, no time will have passed here.’

Both Li Bai and the rhinoceros nodded their heads in agreement. Whereupon the dragon blew into the sky and a vortex of wind did descend on them and lift them up into the sky. Then it deposited them back on the ground.

Looking around Lai Bai could see very little change in the scenery, but instead of it being midday it was just breaking dawn. ‘Are we there, or here, or where ever.’ He said.

‘Yes we are in the future.’ Said the yellow dragon. Then turning to the rhinoceros he added ‘You must meet us back here on or before sunset, otherwise we must return to our own time without you.’ With that the rhinoceros wandered away.

Li Bai was a bit disappointed, having travelled nearly a thousand years into the future, only to be standing on a deserted stretch of the Yangtze. ‘Oh well.’ He thought. ‘I will just settle down and write while we wait for the rhinoceros to return.’

Li Bai was disturbed by a party of people, looking up he could see horsemen, with riders armed with bow and sword. Seeing Li Bai they approached, and he could see by the attire that one of them was very important. ‘Maybe even an emperor out hunting.’ Thought Li Bai. And he bowed deeply out of respect.

‘What is your name.?’ said one of the riders pointing his sword ‘Do you live around here.’

‘My name is Li Bai, and I am on a journey to the birthplace of the great river.’ He answered.

‘Li Bai, you say, named after one of our great poets, who lived nearly nine hundred and fifty years ago, Yet his work is as meaningful today as it was then. He is immortalized through his writings. The people’s hero. Do you write poetry.’ Asked the person who looked important.

Li Bai struggled to say something, not knowing whether to tell the truth or just go along with being named after himself.

‘Answer your emperor.’ snarled one of the guards.

‘Then let me hear some of your verse.’ said the emperor.

So Li Bai recited a short poem saying ‘I wrote that yesterday.’

‘Imposter.’ shouted the emperor ‘That was written nine hundred and forty-eight years ago by the True Li Bai ‘Kill him.’

Too late Li Bai realised he was nearly a thousand years into the future and whatever he had written yesterday was now in the history books.

One of the guards rode forward with sword raised, the dragon appeared. ‘Stop’ it cried out.

Everyone was shocked and taken aback. Turning to Li Bai the dragon said ‘You had better tell the emperor the reason we are here.’

So Li Bai told his story, about the magic bottle and his quest to follow the great river, about the rhinoceros and the hunter and how the yellow dragon had brought them into the future.

The emperor was intrigued and wanted to know more. So he and Li Bai sat talking and swapping stories, the emperor told him how he was on his Southern tour to try and solve the problems of flooding of the river, and so they sat sipping from the magic bottle. Then Li Bai filled three big ceramic jars for the emperor.

‘I will always remember the taste of this jiu, and I will strive to find its recipe.’ stated the emperor.

Just then the rhinoceros walked amongst them. Looking up Li Bai saw it was nearing dusk. ‘We have to go back to our own time now.’ Turning to the rhinoceros he said ‘Did all go well.’

Li Bai noticed blood on the horns of the rhinoceros and said no more.

Bidding their farewells, the dragon blew into the sky and a vortex of wind did descend, to pick them up and carry them away.

Li Bai looked around it was mid-day. Even the same bird was singing and the grasshopper chirping.

The rhino thanked the dragon and Li Bai then turned and wandered away.

Li Bai took a drink from his magical bottle of V.I.P Jiu 8 and said to himself. ‘Well then, what have I learned today. I could have learned the hour and manner of my demise, instead I chose to learn “you can still achieve greatness, even after death.” and he wrote.

Through deeds of heroism

So he lays his claim