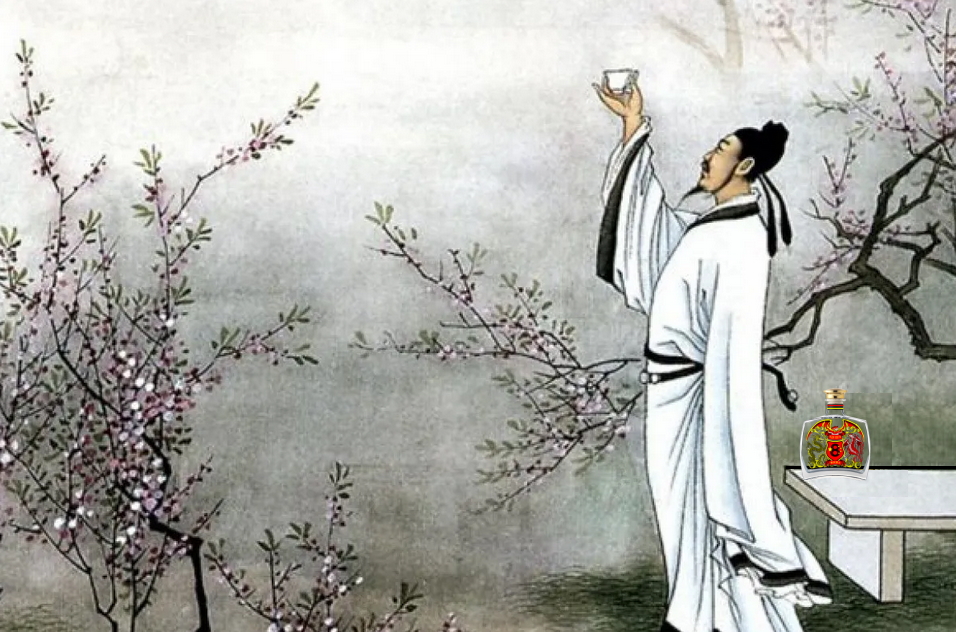 Li Bai was hunched up, with head down and neck tucked into his shoulders as he walked through a mountain pass, for the rain was driven by the wind, and he was drenched. Suddenly he came across a patio or court yard type area, which had been hewn from the solid rock. It was worn and rutted by centuries of unshod and sandalled feet treading upon it. Straightening up and lifting his head, with his black gauze hat sodden, Li Bai saw a temple by the side of the mountain, It had a set of steep stone steps leading up to a pair of stout wooden doors. Either side of the steps there was a channel chiselled in to the rock which let the rain water run down from the steps, adding to the pool of water in which he was standing. Hoping for shelter from the weather, he climbed the steps.

A bell tower and drum tower stood on both sides. Inside the mountain gate, there was a red pair of ornate but strong doors with bronze hinges and handles covered in studs and a pair of brass lion door knockers, with which he pounded on the door.

The door was opened by a young devotee, who let Li Bai in, entering with is left foot first. There they entered the hall of the heavenly kings, which was adored with sculptures of the four heavenly kings. With the laughing Buddha on the middle altar. Then they entered the grand hall where a sculpture of Sakyamuni was sat. Next they entered the lecture hall, with refectories, dormitories, study halls and dining hall and other attachments laid out along the central axis. The young monk took Li Bai to a dormitory where Li Bai quickly changed his clothing, the devotee told him to wait where he was and took away the wet attire and vanished through yet another door.

The head monk came out and Li Bai stood up, placing his hand as if praying and bowed towards the monk.

‘Come’ said the monk ‘You are in time to share our last meal of the day.’ and the monk led Li Bai to the dining area. Where he enjoyed a meal of fresh fruit, fried vegetables, rice and steamed bread.

Although it was not yet midday Li Bai remembered that the monks did not eat after the hour of noon, for they fasted eighteen hours a day.

When the meal was over, Li Bai and the monk took a stroll around the covered courtyard, talking as they walked. For the head monk wanted to know of new events in other places.

Lai Bai told the monk of his adventures to date and where he was heading.

The old monk told Lai Bai to be careful, for he had received news that a group of bandits were hiding somewhere in the mountain, having been chased there by the authority’s who were looking for them.

Noticing that the rains had stopped and the sun was shining and the ground was dry. Li Bai told the monk that he would continue his journey. The young monk brought Li Bai his clothing which had been dried and neatly folded, putting them into his backpack, he was ready to leave. The head monk and a half dozen other monks who had gathered to listen to the tale Li Bai was telling walked him to the gates. Where Li Bai stepped out with his right foot first. They were standing at the top of the stone stairway saying their farewells, when a group of fourteen horsemen rode into the patio. They were a sorry looking sight, unkempt and unwashed. They looked what they were, a band of desperadoes.

The leader of this band, shouted at the monks ‘Bring all your valuables to me, or we will burn down your temple.’

The monks shouted back ‘If you try doing what you say, you will be consumed by the flames of Naraka. You will suffer greatly.’

‘Never mind your empty threats, you have fifteen minutes before I let my men loose.’ Shouted the bandit boss.

Lai Bai who had slipped behind the crown of monks, bade a young devotee to fetch a lit candle. Then he knelt down and opened his magic bottle, he began to pour Jiu into the stone channel and the alcohol ran down to collect in a pool at the horses hooves. The horse were moving about restless and were skittish.

Just then the young devotee returned and handed Li Bai a lit candle, with which he touched to the alcohol. Which immediately caught fire. The flame rushed down the channel to ignite the pool of alcohol which had gathered on the patio.

A blue flame engulfed the horses, sending them into a blind panic. Bucking wildly they unseated their riders and stampeded down the mountain. The bandits were rolling about in the burning flames or running in circles screaming in pain and fear. With all thoughts of robbery abandoned.

The head monk was awe struck that his words had come true. Then the alcohol burnt its self out, the bandits had skedaddled and looking at the scene, you would think nothing untoward had happened. Li Bai handed the candle back to the young monk and winked. He then headed on his way. As he sauntered along the rocky road, he took a drink from his magic bottle of V.I.P Jiu 8 and thought ‘What have I learned today. “What ever you preached, be prepared to put it into practice.” and as he walked, he composed a poem.

Where hell’s fire did manifest

Base men cried out for their soul

For in their hearts sin did infest.