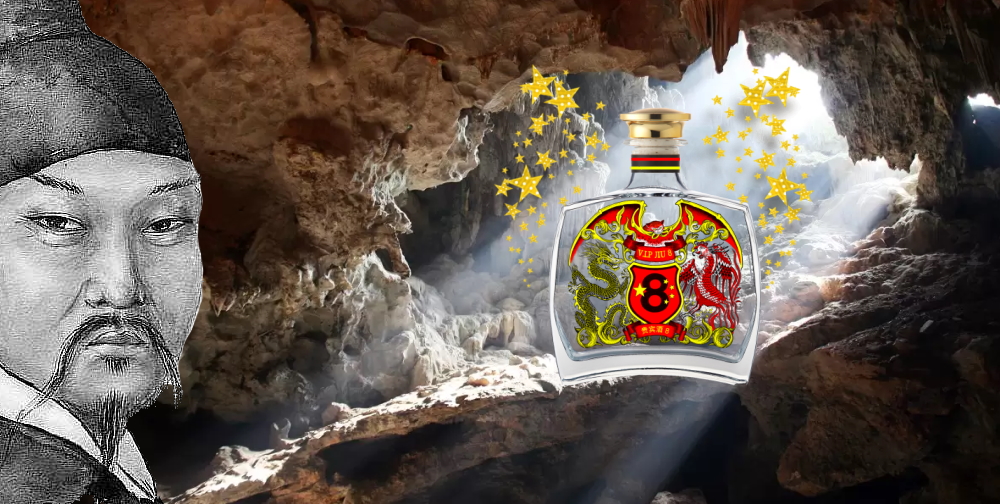 Li Bai had been walking all day without meeting any other wayfarers, dusk was approaching, so he decided to camp where he was for the night. Looking around, he found a small cave in the rocks, well it was more of a grotto than a cave, but it gave shelter from the wind. Taking off his backpack and placing his bamboo box next to it, along with his staff. ‘I will just have one mouthful from my magic bottle, before I gather some kindling.’ He muttered to himself. So raising the bottle he swallowed deeply.

The cave was lit by a bright light, as the stars on the bottle began to glow. Then the dragon, the bat and the fenghuang made their appearance.

‘What in the name of Pangu is this!’ cried out Li Bai in shock and very nearly dropped his bottle. For until then he had no idea that the magic bottle held more secrets that of never emptying.

‘Hello’ said the dragon. ‘We are your protectors for as long as you have the magic bottle.’

Calming down Li Bai chuckled at the thought of it. Then said ‘I suppose we had better get to know one and other, seeing how we will be in each other’s company for a good while. As you know my name is Li Bai, also known as Li Bo and my courtesy name is Taibai. I grew up in Sichuan and became quite good with the sword, and the martial arts. By my mid-twenties, I began my life as a wanderer. I have married four times and have children. I have mixed with some famous people, even met an emperor, but wealth for wealth’s sake holds no appeal to me. I have been in prison, sentenced to death then reprieved and made an exile. So I continue my nomadic lifestyle. Now it is your turn.’ he said to the yellow dragon.

So the yellow dragon began ‘Dragons have long been associated with emperors from the time of Liu Bang until the present day. Some say that the yellow emperor and the yellow dragon are one and the same, but it was my father Huang Long who carried the yellow emperor to mount Kunlun where the yellow emperor became a god. Huang Long first appeared to Fu Shi when he fixed a hole in the sky made by the monster Kung Kung, he also gave Fu Shi writing. My strengths are over water, rain, hurricane and floods, also time and the changing of seasons. The river Luo was my birthplace, but I represent the element earth. I can ward off evil spirits, protect the innocent and bestow safety. Which I have been summonsed to do for you.’ concluded the dragon.

The Fenghuang was the next to speak. ‘My colours of red, green, yellow, black and white represent the virtues. Which are charity, knowledge faithfulness politeness and unrighteousness. As dragons are aligned to emperors so we the fenghuang are aligned to the empress. Our home is in the Kunlun mountains, and we nest high in the Wu t’ung trees. We love music and melody and are immortal. After the birth of Pangu, four other beings came to life. The dragon, the Qilin, the Turtle and the Feng Huang. Joining forces with Pangu we created the world, and we are now known as the four spirits, and we used our powers to create the five elements, we gave life to the five seasons spring, autumn, winter, summer and late summer and we divided the world into five regions. Each of us being responsible for one of them. North, South, East, West, and Centre. The fenghuang are responsible for fire, summer and the south.

After Pangu died, his breath became the wind, mist and clouds; his voice became thunder, his left eye became the sun his right eye the moon. His head became mountains, his blood the rivers and oceans, his muscles became fertile land, his beard the Milky Way, his fur became bushes and forests, his sweat became the rain. The fleas from his fur became animals and his bones, minerals.’ With that the fenghuang went quiet.

Next to speak was the bat. ‘The relationship between bat and man is ancient, we have long represent luck and the five blessings. Which are health, long life, prosperity, virtue and a peaceful death. The gods gave us the colour red to signify joy. Thousands of year ago when man viewed the world as an eternal interplay between active male, passive female. Bats were portrayed as embodiment of the male principle, although we are aligned with the moon goddess Chang’o. Who after taken the elixir of life flew to the moon, When caves were first formed they were portals to other realms. The jade emperor commanded that we guard them against evil spirits. Which we do to this day.’ At that the bat became quiet.

‘Well, now that we know each other, I will drink to a lasting friendship and Li Bai picked up his magic bottle of V.I.P Jiu 8. He said to himself ‘What have I learned today.’ Then answered himself ‘Men need gods, just as much as gods need men.’ so getting pen and paper he wrote.

Give homage to the gods

But rush ye not to meet them

For even when old and bent

Still, life is a precious gem