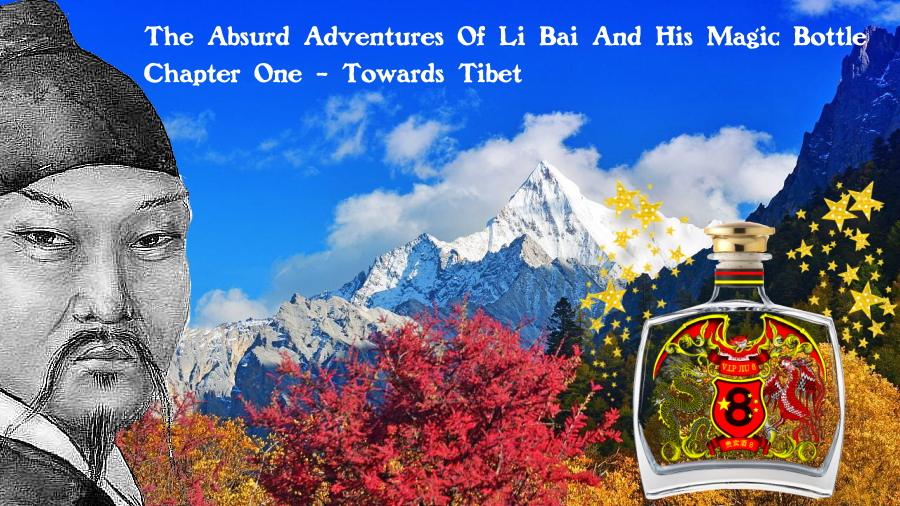 After receiving the magic bottle, Li Bai called on his friend, Du Fu and showed him his prized possession. Du Fu was astonished that such a treasure existed, and to receive it not only off the star gods, but the jade emperor himself was an honour indeed and the queen mother of the west also getting involved.

Du Fu was a little jealous that his friends work had earned such high praise, but after getting over the shock of this wondrous gift, together they went on a month-long binge. Where they abandoned routine and went on a walk about. When they sobered up they found themselves in the fishing port of Lusi town. Unable to recall how they got there and oblivious to what had gone on in the past four weeks and not caring about anything but their monumental hangover. They sat huddled on a bench feeling sorry for themselves.

‘Never will I drink again.’ Moaned Du Fu, with his head resting in his hands.

‘Me neither.’ lamented Li Bai. There and then they swore to each other that they would never drink alcohol again.

‘On an oath of a thousand deaths do I swear.’ croaked Du Fu.

‘I will drink to that.’ said Li Bai and took a swallow from his magic bottle, then passed it to Du Fu, who followed suit.

Now to anyone not knowing about the bottle, it looked like an ordinary water gourd. So no one took any notice of the two bedraggled old men sitting on a public bench, moaning about their hangover and passing a water gourd back and forth.

Straitening himself up Li Bai stood erect. ‘I am going to walk the length of the great blue river from here to its source in the Jari hills in the Tanggula Mountains. To the very spot from where it issues. Then I will cross over from its cradle and I will walk down the other side of the river until I reach Songjiang, over yonder’ he exclaimed. Pointing across the delta.

‘What for, what’s the point in doing that?’ asked Du Fu ‘ you will be travelling through uncharted lands, shrouded in mystery, with tribes of hostile people at your heels, there will be plenty of perils along this dangerous adventure. Some say the great blue river flows from the sacred mount Kunlun. You don’t want to be upsetting the gods. If you want to visit Songjiang why not take a ferry. A crossing which gives you ease and comfort, against a pointless twenty-five or thirty thousand Li trek of hardship not to mention the two or three years out of your life in the doing so.’

‘The reasons why I want to do it, there are non, except that I have never done it, and it will give me plenty opportunity to write, take a ferry you say. That would be boring and as for the gods, I have no intentions of upsetting them. Or even going near them’ said Li Bai.

‘When are you going to start on this mad pointless journey.’ asked Du Fu.

‘Tomorrow is soon enough. First I will have to gather together a few things, such as a strong hemp backpack for provisions, refill my bamboo box with pens, paper, water dropper, ink and ink stone and a new leather nangbao for bits and pieces. Oh! And a stout staff. That is it, I will be travelling light, Here have a drink.’ and he passed the bottle of V.I.P Jiu 8 to Du Fu.

Taking the bottle, he raised it up saying ‘I will be with you, in spirit, every step of the way.’ Then Du Fu drank deeply.

Li Bai sat gazing out across the delta, to a place he could not see, but knew existed. ‘What have I learned today?’ he though. ‘A long journey is shortened by the first step.’ Taking out pen and paper he wrote.

I look across choppy waters of the Yangtze

As the wind shuffles through my hair

I imagine Shanghai in the moonlight

Knowing one day I shall breathe in its air