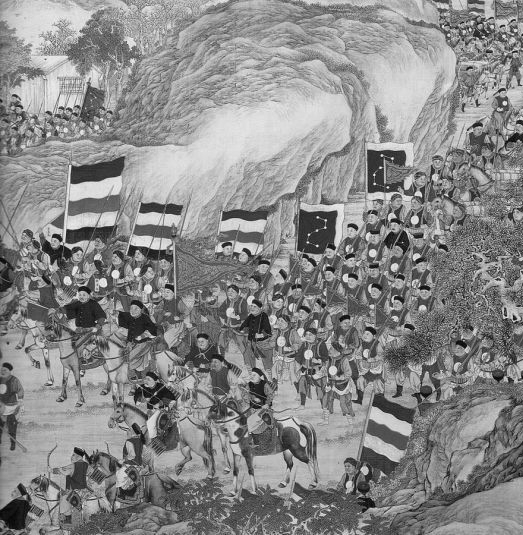 What are the Eight Banners? (a brief history)

The Eight Banners represented military organisation and served as the primary organisational structure of Manchu society. As a short history, the banners were established in the early seventeenth century and grew to become the elite force of the Qing empire.

Though military in nature, the Eight Banners managed other administrative duties, including allotment of wages, distribution of land, management of property, overseeing of welfare, and meting out justice.

A fuller history of the Eight Banners

The Eight Banners consisted of:

At the highest level, the Eight Banners were classified into two groupings. The three upper banners, both yellow banners and the plain white banner, were under the command of the emperor, while the five lower banners were commanded by others. The banners were further split into left wing and right wing according to how they were arrayed in battle.

The smallest unit in a banner army was the niru, which was composed of 300 soldiers and their families. The term ‘niru’ (in Manchu) means arrow and was originally the name of a hunting party, which would be armed with a bow and arrow.

China consisted of multiple ethnic groups, mainly Han, Mongol, and Manchu, but identity was defined more by culture, language and being part of the military. The Eight Banners represented military and served as the main organisational structure of Manchu (Jurchen) society.

At first, the banner armies were made up of peoples from the various Manchu tribes, but as new tribes were amalgamated into the empire, the armies were expanded to accommodate not only the Manchu, but the Han, the Mongols and other minor ethnic groups such as the Xibe, Daur and the Evenks.

There were three main types of banners:

Starting in the later part of the 1620s, the Jurchen (Manchu) started to incorporate the Mongols, which they had conquered or were allied with, into the Eight Banner system.

The Han Chinese who first joined the banners, were replacements for Jurchen troops who were killed in battle, but over time as more Han soldiers joined the banners, the Jurchen decided to form a separate group for them. This was known as the old Han army; its main use was as infantry support. In 1631 a Han artillery corps was formed.
Four more Han banners were created in 1639. By 1642 the full eight Han banners were established. They consisted of a large number of Han prisoners of war and defectors. Many of these men were single and they married Jurchen women.

Over time, there were more Han Chinese in the banners than Jurchen and, gradually, their cultures started to mix. Many banner-men forged genealogies for themselves or joined a Jurchen (or Han banner). The Eight Banners were then recreated from the old Han and Jurchen banners, and given equal status.

The Mongol banners were also created around this time. Anyone who was not in either a Han or Mongol banner became Manchu.